Abandoholism in the 21st Century 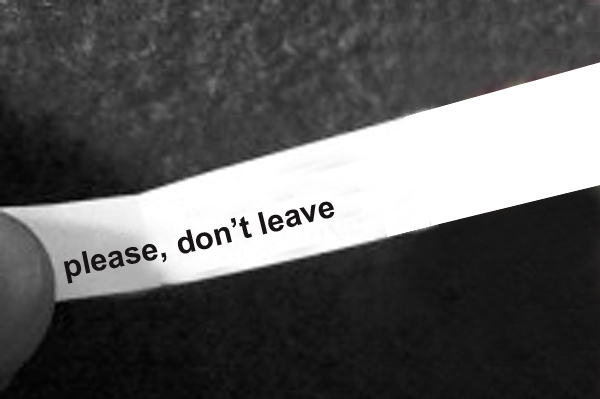 As a child where you abandoned by one of your caregivers? Did someone you love put an abrupt and insensitive end to your relationship, leaving you to pick up the pieces? Are you consistently drawn to unavailable partners? When someone expresses their interest to love you do you create distance? Do you sabotage your own success in various aspects of your life? If you answered yes to any of these then join the club, chances are you’re a recovering ‘Abandoholic’. On the surface it might sound like a bizarre addiction not too dissimilar to the numerous isms which occupy our psyche as unwelcome guests, but Abandonment issues are probably the root cause of much dysfunctional behaviour and suffering in our society today.

Abandoholism is being drawn to the painful heart ache that arises as a result of pursuing people who might be unavailable emotionally, physically and energetically. Many who have experienced abandoned in childhood will consistently find themselves addicted to this high recurring drama, which can become an unconscious pattern in their lives. Although on the outside the affliction of emotional heart break can be excruciatingly painful, it is simultaneously highly appealing, keeping adrenaline and stress hormones alive through out the body and mind. This contradiction often adds further fuel to the notion that the Universe is not a safe place, distorting our self image and that we’re unlovable.

Why are people drawn to Abandonment?

As someone who has a fear of abandonment and is a recovering Abandoholic, I can give you my perspective. When you have put yourself on the path of rejection so many times, you begin to equate feelings of insecurity with love. In my colourful life I can count on my fingers the number of people I have had romantic relationships with. Although I have had relations with both women and men they have been few. Sexuality has always felt fluid to me, not restrained by the confines and beliefs of modern society (afterall isn’t the higher self or soul gender less and without boundaries?)

So on the one hand I’ve always been particular about whom I’ve shared intimacy with, despite having numerous invitations from attractive admirers. In part due to the belief systems of my strict Indian upbringing which generally frowns upon intimate relations with others before marriage. Partly because I believed it was a sacred act to connect with another through a mind, body, soul connection. Yet on the opposite side of the spectrum I have consistently pursued people who did not cherish or value me for various reasons – a catch 22 if ever there was one!

Upon honest reflection I’ve noticed an emerging pattern, that there where always a handful of people I felt strongly attracted to who where unattainable. Each time I pursued them a piece of my heart would splinter and fracture – it would literally feel as though someone was repeatedly stabbing my heart with a stanley knife! Ouch – The emotional charge was painful but at the same time felt exhilarating, and so I would continue this dance with someone else, always unconsciously. When I would feel attraction to someone Abandoholism usually aroused in me a fear of losing the object of my affection. This can be viewed as the main driving force behind Abandonment, triggering a cataclysm of events that reinforced a need for approval, love and self-worth.

Ironically at the same time this dynamic occurs it causes massive overwhelm on part of the recipient. Our partner might distance themselves as a result, taking on the role of an Abandoner. We might be accused of being overly ‘clingly’, ’emotional’ or ‘needy’. The pain and rejection is then usually internalised and we might torment ourselves with questions like:

“What did I do wrong?”
“Was I so unlovable that they felt the need to behave like this or leave?”
“Could I have done something differently to make them stay?”
“If only I…”

Ultimately we will not receive the satisfactory answers we seek if we continue to ask these kinds of questions of ourselves because they’re fundamentally rooted in deep delusion. That delusion is that there must have been something wrong or lacking with us in the first place, but as a direct expression of Source we are perfect, whole and complete in each moment. That is how we came into this world. We would do well to remind ourselves each person is only ever acting from their own internalised projections, conflict and fears. In this light we can understand the Abandoner as the epitome our disowned self whom we may have turned away from at a young age. The deeper journey towards Healing may begin to manifest with such a realisation.

Playing the role of Abandoner

There are those who will consistently and unconsciously play the role of an Abandoner for the upliftment of their souls journey and to gift others with invaluable life lessons. It is no easy job to categorise, define, blame or point fingers at Abandoners because much like everything else in our Universe they’re multi-layered. Abandonment from a caregiver whether through the death of a caregiver or abuse probably acted as a trigger for their behaviour. Abandonment itself does not discriminate between age, sex, race, religion or sexual orientation. Therefore anyone can exhibit its characteristics and if we closely inspect our lives most of us already are to varying degrees. Have you consistently played the role of an Abandoner or Abandonee? Perhaps a little bit of both, depending on which side of the Abandonment picket fence we currently sit will influence how we absorb the information in this article.

However there are ‘Abandoner addicts’, those who consistently exhibit Abandonment behaviour towards others under the cool disguise of ‘detachment’, usually as a result of traumatic Abandonment earlier on in life. Secretly they may gain an underlying pleasure from inflicting deep emotional wounds upon others, this becomes a means of control that may have eluded them in youth, that they dare not openly admit to themselves let alone others. They tend to lean towards narcissistic tendencies, with a desire to demonstrate their power in an attempt to mask their deeper hidden insecurities. They will attract Abandonee’s and together they will carry out an eternal dance. As they Waltz together they’re pushed, pulled and are driven by their own internal insecurities, fears and projections.

It’s not uncommon for them to ‘wash over’ or deny their authentic feelings of guilt and remorse, because they’re deemed ‘useless low vibrational emotions’. Distraction may come in the form of a new love, they may start their lives anew, with a false sense of renewal and inflated ego. Ironically they may turn the tables and remind your for your part in the disintegration of the relationship due to your emotional neediness, or dependence. However these characteristics only arose in reaction to them pulling away in the first place. With all this in mind an Abandoner does not set out to stomp on your heart so all that is left is a mushy pulp. As with all beings they are primarily motivated by their own insecurities and a desire to be loved.

Souls who chose Abandonment as a Life Lesson

Those who have opted to benefit from the expansive life lesson of ‘Abandonment’ for the upliftment of their souls journey very often experience a childhood trauma early on, this serves to act as a seed of intention for a series of events and people we attract into later life. When I was around 1 years of age my mother gave my grandmother permission to take me with her to majestic India. Little did my 1 year old brain know that I would not feel the warmth of mothers skin again for nearly 2 years. Originally it was not intended that I stay there for so long but sometimes lifes makes alternative plans without your consent (especially when you’re only 12 months old!)

When I did reunite with ‘mother’ I was unable to recognise her as my own mother, instead my grandmother had become my paternal figure whom I was later cruelly separated from when I was returned to my mother – sort of a doubly whammy of epic proportions – There is perhaps no greater bond than that of a mother and her child, for a child so young to be separated from her paternal mother and then to be removed again from another primary caregiver can and will leave a deep imprint energetically, emotionally and psychologically.

Years later I would often ask mother “Why did you send me away and leave me there for so long? Did you not miss me?” stroking my hair, mother would smile lovingly when I asked this question, and with a hint of guilt playing on her lips she would reply “We didn’t intend for it to be so long dear one, of course we missed you dearly…” never quite satisfied with her answer I would ask it again but the vacuum created as a result of this experience was never satiated. It just so happens my mother is one of the most loving, selfless beings I have ever known, as a result it has made it almost impossible to hold any ill feeling towards her. However despite her reassurances, feelings of Abandonment and inadequacy never completely left my spirit.

Many of us abandoned ourselves from a very young age didn’t we? In youth we may have adopted damaging beliefs due to experiences out side of our control. We may have felt dejected from a physical plane of Consciousness which punishes those who dare to speak out authentically and challenge the status quo or current trending ‘spiritual belief systems’. On the Earth plane with one person unconsciously inflicting pain upon another and the other retaliating with much the same. Have we have lost our innate connection to the inner self and each other? Spirituality has become a highly distorted concept with an array of confusing, conflicting ideologies and imposing beliefs. We may have forgotten to pause and ask “Is this true for me? Does this resonate with me?” Ironically it is within this space that all real answers and connection are revealed and made manifest.

True recovery and Healing from Abandonment cannot come from a purely logical level within the traditional Western framework of Psychology, for often it is our very spirit that is in bereavement. I would advise professional counsel is something many of us must be open to exploring if we are to overcome our shadow. To recover we must create a space where we can ‘be’ with ourselves and ask the right questions. What kind of relationship have we developed with ourselves? What are we being shown through our interactions with others? Through denying anothers pain? Allowing for the grace of something far greater than ourselves to guide our hearts will return us to ourselves.

For further information and recovery from Abandoholism please visit Susan Andersons site www.abandonment.net/abandoholics-anonymous I have recently ordered her book ‘Journey from Abandonment to Healing’ and I’m very interested to share with you my learning. May all beings return the fragmented parts of themselves towards the guiding force of the ‘whole’. Namaste.