Ice-cream for the Soul

“Do you mind if you share your ride with a couple of others luv?” the taxi man beams “I’ll drop you off at the Priory on the way.” We drive steadily through the black of the night. The headlights reveal stubborn trees aligned along the roadside. I feel their naked branches longing for the return of Spring, the warm embrace of sunshine promises transformation. Perhaps my soul too longs to be touched by the kindness of the sun. It has been almost one year since I was here last and my spirit feels full. Day three has come and gone of my two week excursion at Manjushri Kadampa Meditation centre (Conishead Priory) within the Lake District setting.
Amongst the countryside and wilderness I feel connected to a deeper part of myself. An undercurrent that is often lost amongst the furor of the cityscape. Seeing the stars shine against a dark canvas fills my dreams with hope once more. Stargazing has always been a favourite pastime, I like to think of it as ice-cream for the soul. Here every smile greets you with loving-kindness. I grin as I watch the wee Rabbits jumping freely through the foliage – I’m keeping my eyes peeled in case I spot Frodo Baggins nearby – It seems all my earthly concerns temporarily evaporate into the bitter-sweet cold. The familiar illuminated statue of Maitreya greets me quietly at the entrance. The present day Buddhist energy emanates from the surrounding buildings, entwined in it’s rich history. 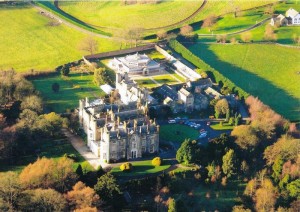 The Conishead Priory was erected in the 12th century, it’s medievil history oozes from every crevasse. It was originally founded as a hospital to treat the ‘poor, decrepit, indigent and lepers’ of Ulverston and was ran by Christians of the Order of St. Augustine. Later it became a Priory, and then a hotel to only once again be used as a hospital during World War II. It was intended for air raid victims but was instead used to treat servicemen, 8,000 of whom where treated here. In 1976 it was returned once again to it’s spiritual roots becoming the home of Manjushri Kadampa Meditation Centre.

I sense the adversities these walls have witnessed but try to focus on the present day energy. All events and people leave behind an energetic residue, depending how volatile and powerful these events where will determine their strength. Also how many people where involved and feeding into that energy is a contributing factor. Those who are sensitive to these energies can readily feel and see them through receiving impressions as though they still exist. You can think of this energetic residue as layers that simultaneously exist at the same time, in the same place (a bit like Photoshop for anyone who’s ever dabbled with the layers palette) It can help to focus in on one particular energy layer when the atmosphere becomes overwhelming.

On the first day I began to feel the presence of non-physical beings (or ghosts as they’re unflatteringly referred to) At night I dream of talking to a young girl, she lays on the bunk bed beneath mine and complains about the dreadful snoring too, we laugh together. I sleep in an International dorm shared with six other women – one lady from Liverpool has a big heart but snores like an elephant – another is a friendly Buddhist nun with a neighbourly Scottish accent, amusingly she is last to rise in the mornings and appears to have brought with her everything but the kitchen sink! One lady is from Portugal, another Spain and yet another Argentina. The latter is a charming soul who sometimes sounds a little drunk whilst speaking English. My bed is closest to a young quiet being from Romania. Although the last two nights have been largely sleepless due to my snoring friend and the change in environment I readily welcome my Buddhist family. It has reminded me of the value of feeling connected to and sharing intimate space with others.

I’ve realised it’s a real skill and art trying to put on three layers of socks in the dark, whilst repeatedly banging your head on the roof of a bunk bed. I wake up at 6:15am each morning, I’m the first to rise in our dorm. All meals are vegetarian and cooked by the monks and residents who take it in turns. The sense of community and connectedness is an integral part of the centre and nourishing to be around. After breakfast I meditate or write ideas for the blog before starting work at 9am. The painting requires pin point focus and becomes a meditation of sorts. Yesterday I was painting tiny eyeballs on small statues and today eyebrows which I found particularly troublesome. There is one word that crops up a lot through conversation and overhearing others, that word is Karma. From my understanding it appears to be misunderstood by human consciousness, Buddhists, the Spiritual community and general population at large. When I get a moment I’ll be exploring the beliefs people create around this powerful word and their impact, but for now it’s time to get a cup of Twinning Chai my superviser so kindly bought me whilst painting in the Art Studio today.